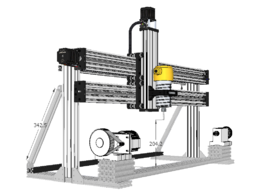 I have been toying with the idea of making a 3 axis rotary CNC machine for awhile. I wanted to make it with off the shelf OpenBuilds parts so any one can replicate it and I felt the LEAD High Z Mod would be a good starting point.