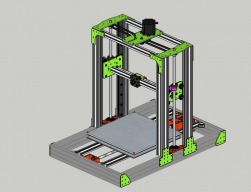 My version a Cartesian style 3d printer, an attempt to eliminate frame vibration and movement and to use up materials left over from other projects.