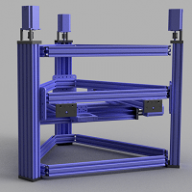 Build in 'Other Style CNC Mills' published by FancyKiddo, May 6, 2017.

A wonky build to eliminate slop on a long Z axis