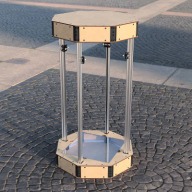 This is an experiment to build a Linear Delta Printer using four towers instead of three. Primary reasons: 1. Build area is roughly cubic vs roughly cylindrical 2. Greater speed and precision from additional control provided by fourth tower. 3. Symmetric kinematics from even number of towers.