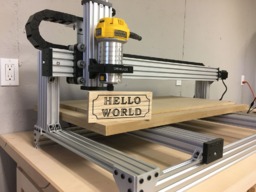 This is my first CNC router build, so I started with the OpenBuilds C-Beam Machine XLarge mechanical bundle, including four high torque stepper motors. I took my time with the mechanical build, sought and found some great help for my control system, and designed and built a custom cabinet to house everything.