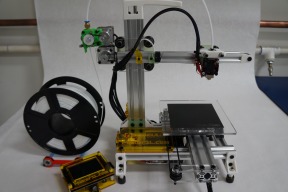 This is a simple cantilevered 3D Printer. It is designed around the OB V-Slot linear rails. I am trying to simplify this as much as possible, all rails will be 250mm long and only one will require cutting (it will be cut in half). The printer will use all OB wheels and gantry plates where applicable, all other plates can be either Laser Cut or 3D Printed (files will be provided for both). I am not set on electronic as of yet, but plan to use a single control board...no Arduino/Ramps control.