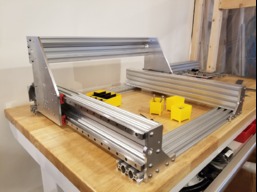 Machine based on Sphinx 55 built with linear rails.