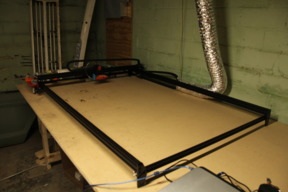 A K40 to ACRO Co2 laser cutter build. Designed and built to expand the work area of the K40