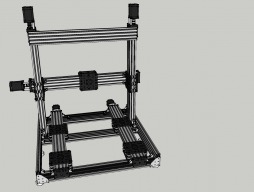 This is my journey from a dream machine to a practical (for me) machine. This is a Cartesian style frame that can change tool heads quickly. The first version will have milling and 3D printing tool heads. Later on I'll add a drag knife tool head.