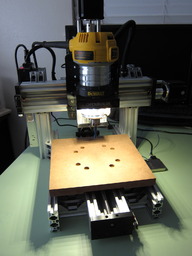 A small system with a big bite. Design achieves a good balance between machine size vs. build area, rigidity and ease of construction all while keeping build cost as low as possible.