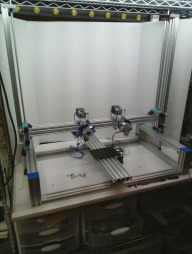 This is my latest printer build. The second printer I've built using V-Slot.