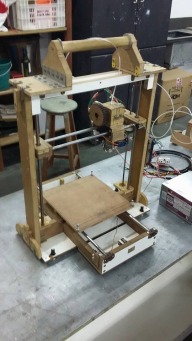 This project is focused on developing a low-cost, portable and open-source FDM 3D Printer.