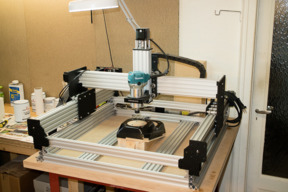 My main goal for my build is to have a machine that is capable of profiling and help me in my designs, for the manufacture of custom automotive headlights.