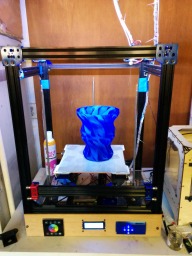 Based on the work of Carl Feniak and his C-Bot. A robust Core XY style 3D printer that has a clean parallel belt implementation and whose dimensions are adaptable to meet builder's needs. The use of open builds V-slot and other open hardware make customization easy. Utilizing a 300x300 build plate this derivation utilizes three lead screws, synced to a single motor via gt2 belt