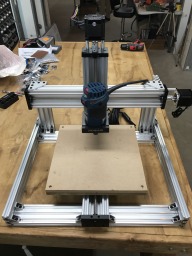 This build is based on the C-Beam build by Mark Carew. I have added axis limit switches and a remote mounted control cabinet. This build also uses a custom moveable table.